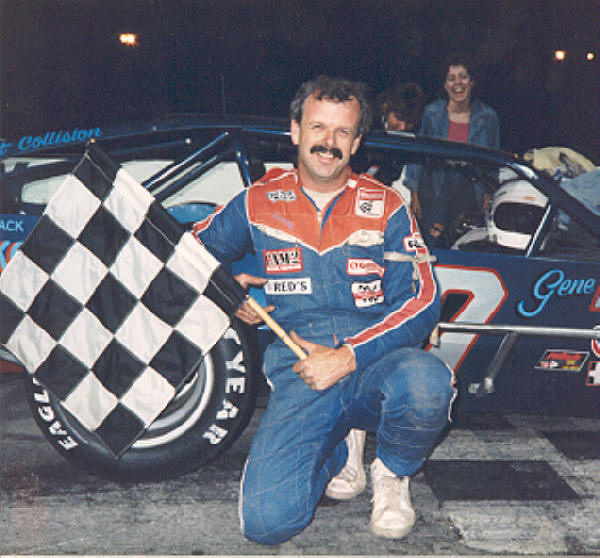 My father owned a business building transmissions and gears, called Old Man
Engineering. My family grew up around drag racing. For me it started in 1979 at
Lancaster Speedway. My Uncle took me to my first stock car race. This was quite
an experience for me. I sat in the grandstands with amazement. As each
different division entered the track, I would pick out a driver to cheer for
that was a customer of my fathers. As the night ended, Uncle Joe asked if I
would like to go in the pits to meet some of the drivers. Of course I said yes.
At the drag races, We would ride with the tow cars, help with the cars as much
as we could. I was 11 and my brothers were 6. Everyone was very friendly with
us. Nervously, I walked up to the winner of the Street Stock class that I
rooted for. I knew he used my father’s rear ends in his car. I introduced
myself, “Congratulations; I’m Kenny Jr., the Old Man’s son”. His
reply “Yeah, So?” He was very grouchy and arrogant. He made me feel
like it was a bother to talk to me. I was crushed. He wasn’t a professional,
wasn’t racing Grand National, just a local street stock racer. I didn’t know
anything about him, except I was cheering for him and he won. I thought all
stock car drivers are jerks. I didn’t care if I ever watched another stock car
race again.

Uncle Joe knew I was kind of upset. He asked if there was anyone
else that I wanted to meet. I told him yes, so we walked down to meet a
modified driver. I dint know who he was, but he had one of my dads decals on
his car. I asked him for his autograph. He said ” hang on a second”.
He walked to the front of his car hauler, grabbed something out of the cab, and
returned. He was holding a composite picture of himself and his car. He signed
it Tommy Druar #37 and handed it to me. I couldn’t believe it. Suddenly my
opinion of stock car racers changed dramatically, and I had a new hero.

That night was a turning point in my racing career. My father was
designing and planning to build a NASCAR Modified. Our family started going to
the track weekly. Every week I would sneak into the pits to see if I could help
Tommy. He would let me wipe down the car, go get tires mounted and pick up food
and drinks from the concession stand. I remember my father asking him if I was
being a pain in the butt. He said no. I was having the time of my life.

At
the end of the season, my father began building a new modified. He was building
the car for Bill Bitterman. Bill and his 2-crew members, Ed Werick and the
“Chin” worked late every night trying to complete the car. I helped
them as much as I could. All their hard work paid off as they were rewarded
with a cover story in Stock Car Magazine. The car was different from any other
from being totally Aerodynamic (modifieds were anything but aerodynamic then)
to being numbered Roman III. It was beautiful. Painted Pearl white, and more
than 20 different shades of green.

Even
though my father was going to own a car that was going to race against Tommy, I
still couldn’t wait until I could get to the track to help Tommy. He even let
me ride to the track with him. I don’t know why he didn’t mind me around. I was
just a kid. As the season went on, I learned first hand where he got his
nickname “the Traveling Man”. He took me to tracks in Perry NY,
Holland NY, Oswego NY, Spencer NY, Shangri-La NY, and even Stafford
Connecticut. He would race wherever he wanted to. I watched him on and off the
track. He was a great guy and an awesome driver. He always had time to smile
and talk to his fans. Through the 1980 season, I kept bugging my dad to let
Tommy drive his car. Tommy didn’t have the equipment that my dad had, yet he
was beating Bill weekly. I knew if he had a shot to prove himself in a good
car, he would have great results. When the season at Lancaster ended, I got my
wish. Tommy was going to drive the Roman III.

He
took the car down to Shangri-La Speedway in the southern tier of New York. The
night didn’t go as well as planned. He was involved in a wreck that severely
damaged the car. Although this was not his fault, Tommy felt terrible that he
tore up my dad’s car. After he ran the car a couple more times, he talked with
my dad and decided to build 2 new cars with the help of my father. Tommy’s
sponsor Jim Connelly was going to own one and Tommy was going to own the 2nd
car for a backup. I was in heaven. I helped Tommy all winter long with the new
construction. During the off months, Tommy began dating my sister Mickey. As
the 1981 season started, Tommy headed south to New Smyrna Speedway in Florida.
Tommy ran well, however he experienced motor problems all week. Opening day at
Lancaster, Tommy was running 4th, the only local driver on the lead lap in the
Genesee 200, when a lap car got into Tommy and took away his hopes of winning.
Winston Cup driver Geoff Bodine won the race that day.

In
May, Tommy and former crewmember Tony Jankowiak, who was driving in Street
Stock at the time, made a pact. They promised to win their first features on
that night. They didn’t, but strangely enough the very next week, it happened.
Tommy won a few more races that season. The following season Tommy drove a new
Dodge Laser built in the Old Man’s shop as he sold His OME Pinto to Tony
Jankowiak, who was moving up into the modified division. For the first time in
their careers the T & T boys would become competitors.  They raced
hard and they raced clean, always putting on a great show for the fans.
Over the next few years,  Tommy married my sister and had 2
wonderful children, Matthew and Ashley.  Tony Married Tommy’s sister
Debbie and had 2 children also.

My
friends and I began construction of my first street stock late in the 1987
season while Tommy and Tony were battling for the Lancaster Speedway Points
championship.  I was hoping to use what I learned through the years
watching Tommy on and off the track, I could begin a successful racing career.
As the season wound down for the T & T boys,  Tommy edged Tony
out at the end and became the 1987 Modified Champion.  The following
season Tommy was able to defend his title and win his second career
championship which included a win in each month of the 1988 season.  Tommy
had a family that he loved,  he really enjoyed being with them.
During the off season, he contemplated hanging up his helmet.
Racing was becoming more expensive and it was harder to spend the time
with his family.  With less than a month before the 1989 season started,
Tommy picked up Mobil as a sponsor and decided to race for another year.
On June 10th,  only in my second year in street stocks,  I won
my first feature race.  At the conclusion of my race, we went directly to
have the car inspected.  By the time we finished with the inspectors,
the modifieds were already on the track.  I would have to wait until
they finished so I could share my joy with my hero.  Leading the points
again,  Tommy was involved in an accident while leading the mid season
championship.  His car jumped wheels with a competitors car and hit the
wall drivers side first.  Tommy was fatally injured in the accident.
I never knew what Tommy thought about my win, or even if he even knew
about it.  I can only hope he was half as proud of me as I was to be
involved with his life.

On June
10th 1989,  we lost more than Tommy Druar; we lost a friend, father,
husband, a great champion and a Hero.